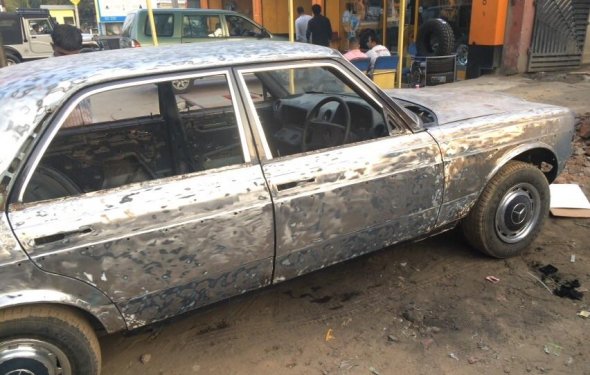 Here's something you don't see every day - or, really, ever. It's a 1985 Mercedes-Benz 300D listed for sale on Autotrader with just under 19, 000 original miles. Although it's unusual for any 32-year-old car to have such a low odometer reading, this one is especially interesting - simply because these Mercedes models are known for their high-mileage longevity.

Offered by Deluxe Auto Sales in the New York suburb of Linden, New Jersey, this 1985 Mercedes 300D has covered just 18, 885 miles from new - hundreds of thousands below the average mileage of one of these "W123" Mercedes models. Finished in gold with a beige interior, it truly looks like a time capsule, with the entire interior and exterior in perfect like-new condition. Usually, when you see one of these, it's belching out smoke as it approaches the 400, 000-mile mark. Not this one.

So how did this happen? The Carfax report for this 300D shows a normal beginning: It was delivered new in August 1985 to its first owner in Austin, Texas, and it had covered 12, 200 miles by January 1987. But then ... it just stopped. By 2003, it was in Ohio, with just 18, 000 miles on the odometer - and it hasn't changed much since, recording 18, 897 miles as of its most recent odometer reading when Deluxe started offering it for sale a few weeks ago.

Of course, the 300D's incredibly low mileage is reflected in its price: Deluxe has it listed for $30, 500, which is nearly enough to buy a brand-new Mercedes-Benz CLA - making it something of a hard sell for a 30-year-old Mercedes. That's probably why it's had trouble finding a buyer, as the Carfax report shows it's bounced around between several dealerships in New Jersey over the last two years. Still, for anyone interested in the ultimate "W123" Mercedes diesel ... this is probably it.

Here's a Ferrari Enzo Listed on Autotrader for $3.4 Million
The Jeep Wrangler Is a Car Manufacturer's Dream Car