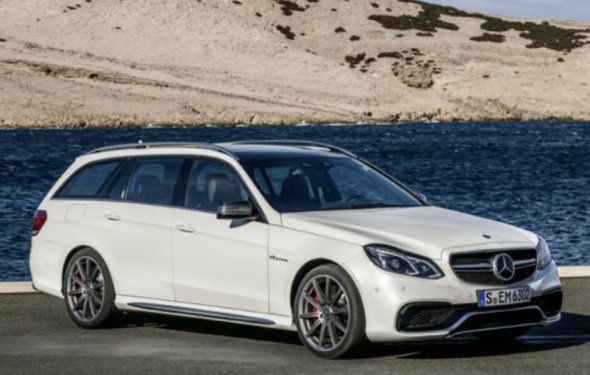 Station wagons aren't supposed to be angry. They're supposed to take kids to soccer practice, pick up some groceries. Maybe they can get boxes of easy-to-assemble furniture at Ikea once in a while. There's room for a lot in a station wagon but there's no room for aggression.

But engineers at Mercedes-Benz's AMG performance division managed to squeeze some in. A lot, actually.

It's got a 577 horsepower turbocharged V8 engine and full-time all-wheel-drive. That's enough power and traction to blast this thing from a dead stop to 60 miles an hour in about 3.5 seconds.

The front sports seats have adjustable active side bolsters that can hold you in tightly or loosely depending on your preference and your waist measurements. In hard turns they push in from whichever side centrifugal force is pulling you towards. Of course, that only invites you take those turns faster and faster until the novelty of those helpfully pressing side bolsters begins to wear off.

But the excitement of being in a viciously fast station wagon that corners as nicely as this one really never does go away. Honestly, this may be the most fun I've ever had in any four-door Mercedes AMG car.

The E63 wagon, oddly, felt like a really good sports sedan. I credit part of it - and this is just a guess, on my part - to the extra weight hanging around the back end which would help to counter the extra-heavy engine up front.

I also credit part of it to the fact that, for crying out loud, it's a station wagon. You just don't expect a wagon to move like this thing does. It's fast, has good suspension in any of its various settings (from super comfortable to firm and sporty) and, of course, there are a host of technology options.

With a total price tag of $117, 000 - starting price is $102, 000 - the AMG E63 wagon could pretty much drive itself if I were inclined to let it. The active cruise control system could safely maintain a following distance behind the cars. Meanwhile, cameras monitored the lane lines, adjusting the steering constantly to keep me in line. All I had to to was keep two hands at least touching the steering wheel, just to make sure I hadn't totally checked out of the game.

But I was rarely checked out at all. In fact, I was looking for more excuses to go pick up a few things at the store.

Source: money.cnn.com
Related Posts
Categories
Latest Stories
mercedes v123 This 1978 Mercedes-Benz 300D is a factory limo with seating for up to eight...
Enriching the Mercedes-Benz Sport Mercedes-Benz has a rich history of innovation and development that has...
Mercedes 240D engine Auto Parts csaaudxdufvvydubudzsfxeruatfdwvrxacuz > Mercedes Parts...
W123 wagon A lovely example of Mercedes most reliable car the 300 Turbo Diesel Wagon...