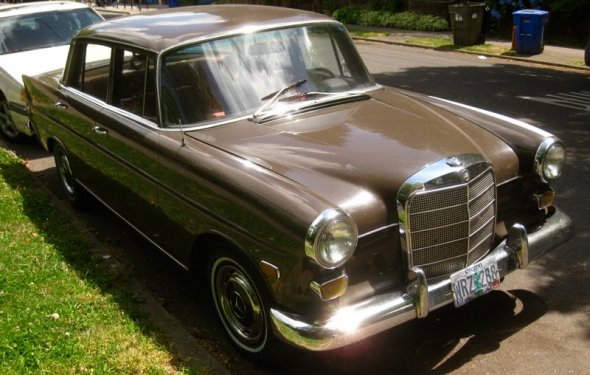 I don’t think there was. I agree with Raphael Orlove that the 1970s was the decade with the coolest cars, but by the end of that decade emissions regulations, economic stagnation and general malaise had made almost everything kind of... well, generally terrible.

Day in, day out, we are reminded just how great and wonderful and lovely and perfect the 1960s were …

Cars from that part of the decade can be tough to find in good shape today. It’s like we intentionally tried to forget about them.

This wonderful car, specifically in 300CD form, is the subject of the latest Regular Car Reviews video. I’m a few days late in posting it but it’s one of the best videos I’ve seen from them in a while.

Like I said, it’s a 300CD, so that means it’s a coupe (“C”) and a diesel (“D”), but there’s no T for turbo in there. So this inline-five oil burner is naturally aspirated, and given the tank-like weight, it accelerates from zero to 60 mph in about a week and a half.

But this was a nice car in its day. A damned nice car, in fact. It had air conditioning with mechanical climate control. If you fix for inflation it would be a $90, 000 car today. It was safe and looks better, I’d wager, than most Benzes do today. It has timeless style. It was a car for high-rollers, as Mr. Regular says.

It’s from when Mercedes was Mercedes. And it lasts. Because good things endure, no matter what gets thrown at them.