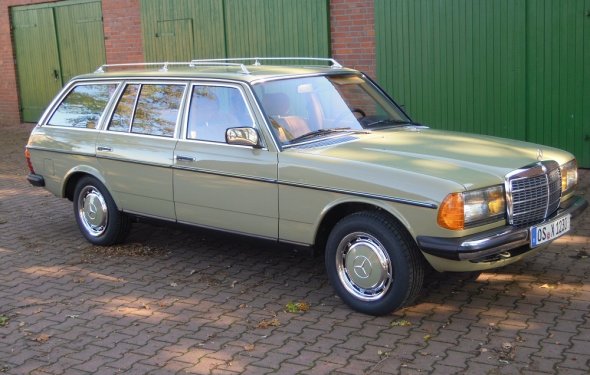 If you are after a workhorse that can carry lots of stuff / people it is hard to ignore Merc Estates.

Today the price situation has reversed with W123s being generally more valuable than W124s and that being so, the case for the 124 has become stronger. It's generally a great place to be and the quality is palpable - everything you touch feels engineered rather than just made. The folding rear seat mechanism is a great case in point; it's far better than on today's estates.

The W124 is probably the last over-engineered Merc. We had no mechanical issues once the self levelling suspension was sorted out in about 30k miles. However, the headlights are rubbish; bad to the point where you wonder whether they are on at all, particularly when it's wet and the road surface is 'shiny'. Our car had a bizarre rear door issue - sometimes once you had opened them you couldn't close them again. Inconvenient does not do it justice! it was a check strap problem - they need to be well greased. Other than that it was simply brilliant. A Citroen driver decided to smear his car all over the back of the Merc. Whilst most of the Citroen needed sweeping up the Merc had a dented tailgate and a smashed rear light lens. Even though it was worth less than £2k then the insurance company thought it was economic to repair.

Any of these cars need to be auto...the strange foot activated handbrake makes a manual only suitable for 'Jake the Peg' (am I showing my age?) and the gear shift has such a long throw you'll hate using it anyway. In contrast the auto box is really good, particularly on late W124s.

Maintenance isn't too bad and parts supply from GSF and Euro is good and not too expensive. Personally I'd go for a W124 300D, but most of these now have stellar mileages. Any of the petrols can cope with big mileages and I would agree with the 23-25mpg mentioned before for the 230 engine.

So my advice would be to go for it...but seriously consider a W124 as a newer, more practical, safer, less rusty, cheaper alternative, which still has the same sort of appeal.