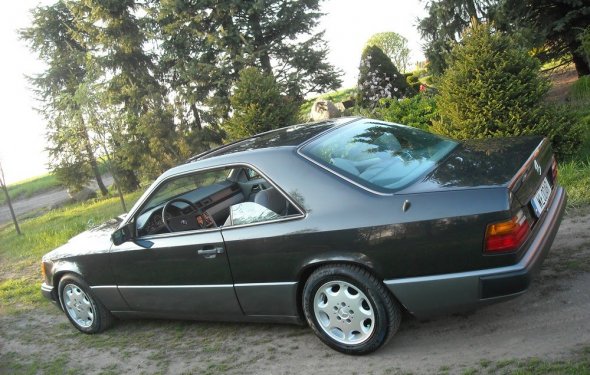 This 1984 Mercedes-Benz 230CE shows 133k miles and is a grey-market Euro example imported to the US when new. While US-market w123 coupes were only available with turbodiesel engines in 1984, the 230CE was powered by a gasoline 2.3L M102 fuel-injected inline-four. Additional features include a 4-speed manual transmission, smaller bumpers, rectangular headlights, cloth interior, and rear headrests. Imported by Cordel Foreign Motors of Omaha, Nebraska as a special request, the car has had three owners and has reportedly been serviced by the same two repair shops during the past 32 years. Approximately 5k miles were added during the seller’s three years of ownership. It is being sold with a full size spare, tool kit, roadside trunk reflector, first-aid kit, owners manuals, books, Oklahoma service records, and a clean Oklahoma title.

The Paintwork is Astral Silver (MB code 735) and some rust bubbling is present on the lower right front fender and below the rear windshield seal as detailed in the gallery.

Smaller European bumpers remain intact and are said to be free of scratching. Door and window rubber are reportedly soft and pliable, and the front windshield and seal were replaced due to pitting.

Bosch rectangular headlight bezels were retained and a new hoodstar and correlating crossbars were fitted. 16” CLK wheels were wrapped in all-season Bridgestone Turanza 215/55/R16 rubber in April 2014 and have only seen around 3k miles of use. Factory 14” Bundt wheels wearing older Michelin tires with around 50% tread are included in the sale.

This example was factory-optioned with A/C, power windows, and a power sunroof. A/C was converted to R134a and is said to work well. Central vacuum-powered locking reportedly operates on both doors and the trunk. The aftermarket head unit is also said to function, as is the factory Becker Grand Prix included in the sale, though the adjustable height power antenna works intermittently.

Cruise control and the right rear window do not work properly.

A dash cap was professionally installed prior to the seller’s ownership. Zebrano wood trim appears glossy on the dash but some small cracks are beginning to appear near the window switches in the center console. A Mercedes-Benz wood shift knob and leather boot were fitted by the seller. All switches, gauges, and lights are said to function properly.

Blue cloth upholstery looks to be in good condition with no rips or tears evident. MB-Tex door panels with matching cloth inserts are tightly fit with intact map pockets on both doors. The backseat appears to have seen little use and is equipped with rear headrests.

Original books and service records from its time in Oklahoma are included. A recent oil change was performed this month, and within the past 3k miles, a new starter, tie rods, steering links, and throttle linkage were installed, the A/C was repaired and recharged, and the gas tank, hoses, filters, pumps, tank screen and fuel lines were replaced. Two driving videos below are viewable below.