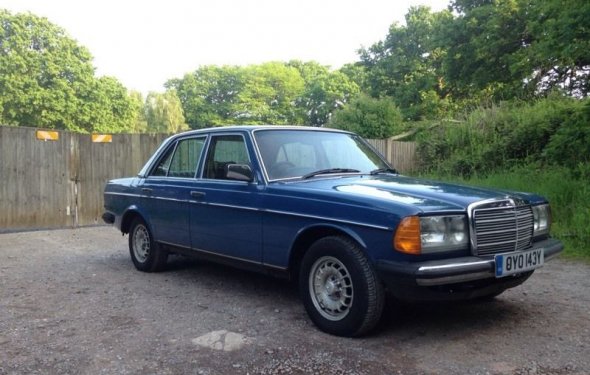 We’ve always been big fans of the W123 Mercedes-Benz, and blogger Rob Richardson’s example is as gorgeous as any we’ve ever seen— we love, love, love the color on his car. Rob was nice enough to chat with us and answer a few questions.

RR: I wanted a daily driver classic and these cars are famed for their reliability, engineering, and ability to cover distance. I have a pretty long motorway commute to work so the old Benz is perfect for wafting along and soaking up the miles whilst reclining into an armchair. It’s basically like being in my front room, but with a steering wheel.

MCB: How did you find it?

RR: By total accident. I’d spent far too much time and money building a 1985 BMW E28 5-Series as my daily with the intention of keeping it a good while. I saw the Benz advertised whilst browsing the ‘net and, well, the rest is history (and so is the E28).

RR: Amazing. It’s like owning a modern car in terms of practicality, reliability, comfort, and to some degree fuel consumption, but it doesn’t look like a fridge, is properly screwed together, and you feel like a movie star (read: dictator) as you cruise around. It’s a statement car, especially using it everyday.

RR: It’s like sailing a massive boat on a sea of marshmallow. In a good way. It rides perfectly even with over a 4″ drop. The performance is, shall we say, leisurely, but for me it’s not an issue as I drop onto the motorway in the morning, cruise at 70-80mph and then do the same again at night for a 100 miles a day. This car was not built for anything as crude as a 0-60 dash!

MCB: What makes you love this car?

RR: I’m an automotive development engineer in real life and the engineering geek in me loves the thought, design, and engineering that’s gone into this car. Every last part on it is “finished” to an amazing level of detail. My favourite part is still the pneumatic central locking; watching those door pins rise like a Bond girl out of treacle is pretty special.

MCB: What should a person look out for when buying one?

RR: Rust. These cars rot and will ruin your life. Everything else on them is pretty bombproof.

MCB: What can a person expect to pay?

MCB: What else have you owned? And what would you like to own in the future?

RR: Lots, how long have you got?! I’ve had everything from Minis, Chevettes, E28/E30/E36 BMWs, two Mk1 Eunos Roadsters, and a Porsche 924 to my current fleet of a ’68 Triumph Herald Cafe Racer, ’76 Toyota KP30 Mountain Racer, and the Benz. Obsessed? Probably!

In the future, I’d like to own something like a pre ’73 911 and a KPGC10 Skyline or similar; who knows what the classifieds will throw up when I’m not expecting it!

The W123 on the other hand, for me, will only ever be a Gentleman’s express: point it where you want to go, sit back, relax, and effortlessly cover vast distances.

how science points to god who science is it why manager is appointed how much product to use in curly hair where's the london bridge in arizona how london became the center of the world how much developer to bleach how system restore windows 10 why roadmaps are a waste of time where to find device id on android what's start up how much project management cost where entrepreneur came from how many startup companies fail what design principle is based on repetition when product owner is not available how management is an art how management is an art how much london congestion charge whose business is safeguarding which technology uses a tunneling protocol how often to service well whose teaching is in support of education for all whose science is it anyway aqueous solution whose ph 0 is how many device can airpod pro connect how often do entrepreneurs fail how many technology parks are in india which manager has been sacked the most how much business analyst make what entrepreneur really means how many business days in 2022 how much project manager earn in uk where london is located who management of pain whose project is the metro manila subway where system root is the c drive where to answers questions what teaching positions are in high demand what device is espressif whose project is nlex and slex how much entrepreneurs earn in india which london airport is closest to london startup where is izzy where is brooks from design star
Source: motoringconbrio.com
Related Posts
Categories
Latest Stories
Vintage mercedes cars The 1954 300 SL Gullwing served as Mercedes-Benz s ticket into American...
Enriching the Mercedes-Benz Sport Mercedes-Benz has a rich history of innovation and development that has...
Mercedes benz station wagon diesel Straight off the plane and onto the breathtaking coastal roads of Southern...
Used mercedes Wagons AWD. Cold Weather Package (Heated Front Seats, Heated Rear Seats, Heated...