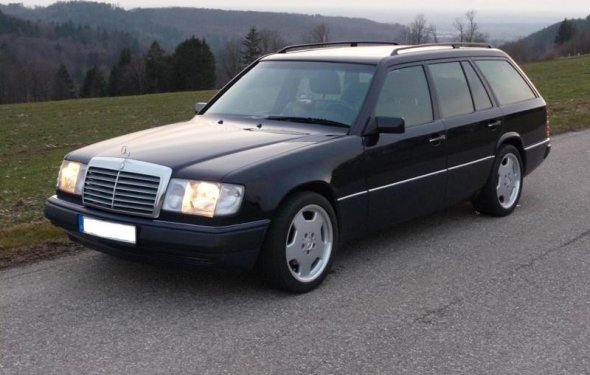 Here are some notes about Mercedes W124 wagon ownership in case the information is useful to other people. Specifically my experience is with the later E320 wagon (with the DOHC m104 3.2L six).

The Mercedes W124 is a fantastic car and I highly recommend it to anyone who can handle (and enjoys) doing basic maintenance and repairs themselves. They are not, however, for the faint of heart or for people who need a shop or dealer to repair everything on the car – these are somewhat complex cars with a few potential issues and repairs could get expensive unless you are willing to research and do a few things yourself, including tracking down used parts when needed.

The E320 is solid, safe, and quite reliable. The wagon portion is really well designed for doing wagon things:

The rear seats fold forward nicely in two sections and latch flat into the floor, there is a removable cargo cover and cargo net system included, and the car even provides two rear-facing seats in the back and is technically able to seat seven people when needed. The included roof rack works well and is easy to adjust. The wagons feature a hydraulic self-levelling rear suspension that handles heavy loads brilliantly.

The car itself drives better than the popular W123 wagon: it is much more modern, more comfortable, and smoother. The wagon door provides a soft-close mechanism much like the W140 S-class trunk latch, and the W124 has quite a lot more power of course. The later ones have very good brakes (with four piston front calipers), ABS is standard, and a rudimentary traction control system called ASR was an option.

All W124s have a driver side air bag and later (1994 and 1995) cars have a front passenger side air bag. This was added by taking away the glove box because Mercedes did not want to redesign the dashboard for the two final years. The center console does have a storage compartment and the front doors have reasonable storage as well.

Keep in mind that these cars do not have particularly good fuel economy and they do require premium (91 octane or higher) fuel. The m104 six provides about the same fuel economy as the 4.2L m119 V8 in the E420 sedan. It may be the sheer weight of the car plus the 4-speed automatic. Even freeway fuel consumption is not that great.

The W124 wagon we wound up buying is a 1994 E320 with, as it turns out, nearly all of the options. Some of the interesting ones include:

All of the US-market wagons (I believe) have the power sunroof standard along with the rear-facing fold-out seats and cargo cover system. The standard wood trim is zebrano (zebra wood) like on the W123 but there is also an optional burl walnut trim.

We use our E320 wagon to tow a Scamp 13-foot trailer. Curt Manufacturing makes a compatible trailer hitch kit that I combined with a generic trailer harness wiring kit. There is not much to the installation beyond following the Curt instructions and the wiring is relatively simple: I ran a fused 12V wire from the battery positive, following some brake lines to the rear of the car, then tapped into the tail light harness behind the spare tire. I removed the rear gray “glove box” trim to get to a rubber plug where the harness comes down to the hitch and also to run one wire over to the passenger side tail light turn signal wiring. The wire colors were:

Issues and Things to Avoid

There are a number of potential problems or weak points on the W124. They are easy enough to deal with but it is important to be aware and ready.

The W124 has the first implementation of 4Matic and it is extremely complex and trouble-prone, plus parts to repair it are difficult to obtain. Just avoid the the 4Matic-equipped 300TE or stick with the E320 which was not offered with 4Matic in the US. This wikipedia article explains 4Matic.

The 4-speed automatic in these cars is a Mercedes design and is very reliable for an automatic. Most used W124 cars are likely to have enough miles on them to need a transmission rebuild. A replacement transmission runs about $2500 at this time which given the low cost of the car to begin with is not really that big of a deal. You may be able to find a car that already has a new or rebuilt transmission, that is definitely a bonus. The previous owner of our E320 had the transmission replaced at about 200, 000 miles.

These transmissions can fail in a number of ways but a typical warning sign is difficulty in engaging reverse: if that is happening, a transmission rebuild is coming soon. A car without working reverse definitely needs a transmission.

The W124 wagons were made during the range of years in which Mercedes had a huge problem with wiring harness insulation. The later-model E320 cars like ours will absolutely have the “wiring problems” so it’s important to know what harnesses have already been replaced when looking at used cars. There are actually several wiring harnesses under the hood that can (and will) fail, I think the total is four separate units if you count the throttle body.

The first one to check is the main fuel injection wiring harness. This starts at the ECU (behind the battery) and runs to the engine (between the valve cover and the intake manifold), connecting to the MAF, all injectors, and various sensors on the front of the engine. This harness is very expensive ($1400 or so new) but it can be replaced with a used one that was built after the wiring insulation was improved – the key is the date code on the harness.

The fuel injection harness date code can be found near where the harness plugs into the ECU. To see it open the hood (all the way up via the vertical latches helps) and remove the plastic ECU cover behind the battery (it’s just stuck into place, no fasteners). You should hopefully see a white Delphi parts tag with a date code much newer than the year of the car on this harness, indicating a replacement part. A date code near the car’s production date or model year likely indicates the original part and this harness is very likely to fail soon if it hasn’t already.

Another harness connects to the alternator and starter (this actually failed on ours) but is much harder to inspect.

Source: yurovsky.github.io
Related Posts
Categories
Latest Stories
Vintage mercedes station wagon It seems like there is always a nice supply of meticulously maintained...
Turbo Diesel Wagon Imagine a world where American car buyers understood the benefit of the...
300 td This 1987 Mercedes-Benz 300TD was purchased new at Rasmussen Mercedes in...
E class wagon diesel Is like a well-tailored suit; it will always look good, feel right and...
Friendly sites