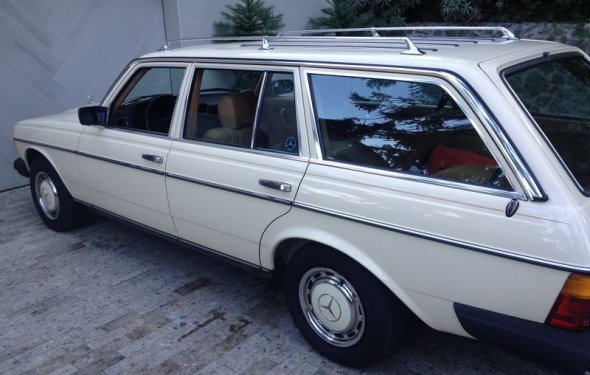 I recently had the opportunity to drive a diesel-powered 1987 Mercedes-Benz G-Wagen. This is just like the plush, high-tech G-Wagen models that all the celebrities drive, except instead of an infotainment system, mine had an altimeter.

You'd know all about my G-Wagen adventures if you followed me on Twitter, because I posted a picture of myself standing next to the G-Wagen in question: a manual-transmission 240GD Cabriolet, graciously loaned to me by local automotive retailer Selden Motors, which is perhaps the only used car dealer on earth whose inventory includes both a 1965 Mustang and a stick-shift BMW X5.

So, you might be wondering, just how was the G-Wagen to drive? Well, if I said "slow, " I wouldn't be doing my full duty as a highly respected automotive journalist to perfectly explain the situation. So instead, I'll use a real-world example that better illustrates my viewpoint: the thing drove like a riding lawnmower towing a sailboat. And I don't just mean some dinky little single-seater boat with a sail the size of a fluffy bathroom rug. I mean the kind of sailboat you refer to as your "other wife" when you've had too much eggnog at Christmas parties.

But we're getting ahead of ourselves here, because any real G-Wagen review should include a Mercedes G-Wagen History Lesson, to illustrate just how long these vehicles have been in service to our great world. So here goes:

79 AD: The G-Wagen is created by Pliny the Elder, upon witnessing the eruption of Mount Vesuvius. "We need a car that can withstand such future eruptions, " Pliny writes, in perfect English, even though the language wouldn't be invented for more than 500 years. "And also transport Kim Kardashian and her butt to the mall."

337 AD: As emperor of Rome, Constantine the Great commissions a fleet of G-Wagens for his private use. "And black those babies out, " Constantine tells a slave, shortly before sending the slave into the Colosseum, where he must battle a lion for Constantine's private amusement.

847 AD: The Mayans are hanging out on the shore, creating calendars and sacrificing animals to the Gods, when a diesel G-Wagen washes up after a nine-week journey from Europe, where it had accidentally fallen in the ocean. It starts on the first try. Unsure of what to think about the boxy, utilitarian vehicle, the Mayans sacrifice it to the Gods.

1214 AD: Genghis Kahn uses a fleet of militarized G-Wagens to take over hundreds of villages throughout Central Asia. This is largely overkill, since these villagers mainly live in mud huts and haven't discovered the concept of shoes, but Genghis Kahn carries on, undeterred. "I like the door latch sound, " he says, as he beheads a terrified family.

1492 AD: Christopher Columbus sails to America with a fleet of G-Wagens, which he provides to Native Americans as gifts. Months later, they return the G-Wagens, saying: "Smallpox blankets would've been better than these German pieces of crap."