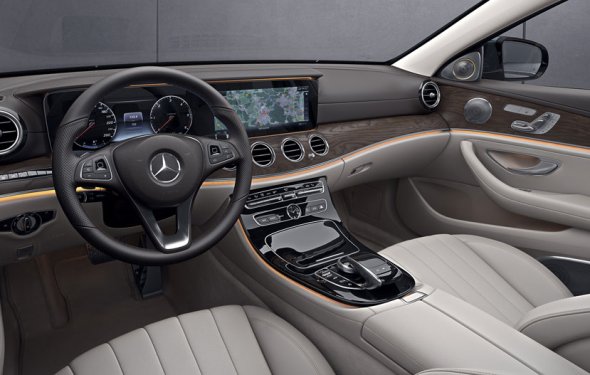 I love this car. Yes, it’s expensive, but I don’t care what it costs. To me, it’s that good. As I wrote on our site, this is the passenger-car benchmark, as far as I’m concerned. Historically, the E-Class Wagon’s blend of elegance, understatement and practicality has placed it among Benz’s highest-earning-demographic cars in the lineup, joining the S-Class coupe (!) as MBUSA’s demo leader.

As I said, I love it. The 3.0-liter turbo V6 powers the E400 wagon with authority. It’s strong. It also works terrifically with the nine-speed for some real oomph when needed - the trans is smooth when you're not really legging it and changes gears quickly the harder you push, especially in sport and sport plus modes.

The steering is accurate with good feel, but it might not matter: The E-Class Wagon has Benz’s Drive Pilot optional. Just set the speed and off the wagon goes with no input. Around Detroit, I found the car stayed in its own lane on straight roads and sliced smoothly through corners, adjusting speed as needed depending on what was happening in front of me.

The chassis is rock solid. Mercedes put in floor and body-shell bracing and increased the sound insulation in the floor and sides; sound absorbers were also installed under the rear seats and in the wheel arches. It also added seals on the windows, door handles and door hinges. It all makes this among the quietest cars I recall, good for longer hauls.

The interior is straight-up E-Sedan, so fit and finish is among the best in all of automobiledom with rich woods and excellent styling.

Benz just dropped the E63 S wagon, a 603-hp monster arriving this fall. Lordy. For now, this creamy-smooth car does nicely. Is it my favorite passenger car? Probably.

This right here, though? This is a case study in why we like wagons in the first place.

Wagons take good cars and make them better. The E-Class sedan is nice. It’s jam-packed with fancy future tech and looks the part of a serious executive sedan. Yet it lacks something - verve, maybe. It’s good and it’s comfy, but no amount of competence can make it exciting.

Just as the E400 Coupe gives the model a welcome dose of fashion, the Wagon gives it practicality and a sense of style of its own. It might not have attitude (that would be the E63), but it has personality. It’s tastefully drawn on the outside and wonderful on the inside.

And the best part? It offers loads of usable space and still drives like a car. I think that’s part of what scares people away from wagons in the first place - they don’t have that up-high crossover/SUV driving position so sought after today. Those of us who actually like to feel a little hint of connection to the road beneath us will appreciate it, though.

Besides, I’m not sure if there’s anything a 95th percentile SUV owner will throw at this wagon that it can’t do: It’s a grocery-getter, a road-trip cruiser, a kid hauler - especially with those extra jump seats in the back. It’s smooth and quiet, and it’s a great comfortable crosstown commuter; the adaptive cruise control will drive it through a morning traffic jam for you (I tried it a couple times, and it’s freaky).

There are gimmicks on this pricey tester, like the heated and cooled massage seats and scent atomizer. These are nice enough to have. But it’s the presence and solidity that really sell it. It feels as overbuilt as a German wagon should. Having pulled the cargo cover out of the back to deploy the jump seats, for example, I can verify that it is the right approximate shape and weight to double as a battering ram.

Take out the massage seats - take out the entire $11, 200 Premium 3 Package while you’re at it - and the formula doesn’t fundamentally change. I love the magnolia flowing lines trim ($1, 300), but its absence wouldn’t make this car less worthy.

I fear we’re never going to get back to W123-levels of figurative and quite probably literal bulletproofness, but this is a tank - a really great-looking tank with massaging seats.

Don’t get the bright-colored floor mats, though. They’re essentially useless.

Joining the choir, I think this E400 wagon is exactly what a luxury car should be, but with all the extra storage you want from your crossover. The upside: It isn’t a crossover. It’s the perfect tool for someone who wants to look like a million bucks in the handsome E-Class but doesn’t want multiple would-be daily drivers. It’s no truck, so don’t plan on hauling your entertainment center across town, but it’ll comfortably store just about anything else in the cargo space in the back. Moreso, you can pretend that you’re back in the 1970s with the rear jump seat.

The only way this E-Class can get any better for performance-minded enthusiasts is to ship it over to AMG’s headquarters in Affalterbach and work it over.

Source: autoweek.com
Related Posts
Categories
Latest Stories
Mercedes wagon used The Mercedes E63 AMG Wagon is loved by Mercedes-Benz and journalists alike...
Enriching the Mercedes-Benz Sport Mercedes-Benz has a rich history of innovation and development that has...
Mercedes 280TE Let s check off all the wonderful attributes today s Nice Price or Crack...
Mercedes benz station wagon diesel Straight off the plane and onto the breathtaking coastal roads of Southern...