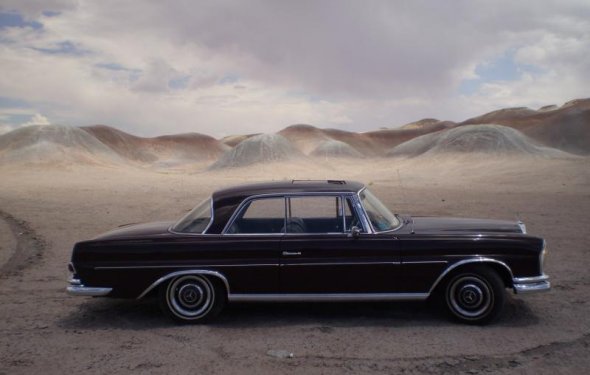 Prices are a fraction of the current S-Class coupes, and the oldies are beautiful and appreciating in value

Mercedes-Benz is perhaps best known for the stolid, bank-president demeanor of its S-Class executive sedan. But the brand has also built a stately, range-topping coupe since its earliest days. Rock-solid, comfortable, commodious, and packed with the latest engineering technologies and luxury options, these big, closed-bodied, two-door cars offered a sportier and more elegant alternative to the big four-doors.

With its perfect proportions and clean, rounded lines, the coupe pictured here—initially introduced in 1961 and known by the Mercedes designation W11—casually exudes understated, old-world, old-money poise.

According to Mike Kunz, the director of the Mercedes-Benz Classic Center—a Southern California subsidiary of MBUSA that supports, restores, and sells the brand’s most notable vintage vehicles—these cars possess “an understated, regal elegance.”

If a character in a film (or, say, a Ralph Lauren ad) is seen driving one of these cars, you know they are, and have long been, a success.

The W11 was designed by Paul Bracq, the masterful—and French—head of design for Mercedes-Benz during the ’60s and ’70s. (Following his tenure there, Bracq went on to design his home country’s high-speed TGV train.) Bracq updated the car in 1969, and on these later vehicles, the traditional upright Mercedes grille was squared off and lowered for a more sporting appearance, and additional luxury trim—more leather, more wood veneer—was added inside.

But it was the change under the hood that was most compelling. In place of the typical inline, six-cylinder engine that had long been a Benz stalwart was a new 3.5 liter, V8 that had up to 66 percent more power than the engines it replaced, cutting acceleration times to 60 mph by up to nearly five seconds and increasing top speed by up to 20 mph.

This extra speed was combined with major advances in passenger protection. “The W111 coupe set the benchmark in passive safety-driven design for high-end luxury coupes, ” Kunz says. It was among the first cars with a built-in passenger safety cell, where the front and rear of the car are designed to crumple upon impact—absorbing energy instead of transferring it to the cabin and its occupants. It also had grippier four wheel disc brakes to stop the car faster, and three-point seatbelts to stop occupants from becoming projectiles faster—an advance over the simple lap belts usually available during the era. Collapsible switches, a thickly padded instrument panel, and a fall-away windshield, lessened the likelihood of personal injury during a crash.

The car could thus do nearly everything well. It looked amazing. It accelerated and stopped with alacrity. And though it was a two door, it had room for four passengers and their luggage in luxurious appointments.