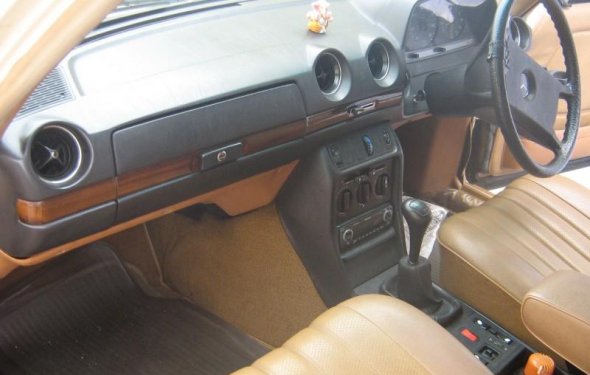 The 1980s Mercedes 240s are appealing cars, with a stout, dependable sort of charm. Have you ever wanted one of those W123s but thought it’s just got one wheel too many? If that’s you, then boy, will you be excited to see this.

Yes, it looks like someone took a 1981 Mercdes-Benz 240D and hacked it up into a motorcycle rig that makes a Honda Gold Wing look like a Honda Ruckus. And they did a pretty spectacular job of it, too, if you’re willing to agree that this sort of mutation can be considered spectacular. And I’m willing.

I saw this first on the Facebook group How Not To Design a Car, and a little bit of further research—there’s really not that much about it online, as far as I can tell—seems to suggest that it’s part of the collection of the Vehoniemi Automobile Museum in Finland.

I’ve reached out to the museum for further details, and I’ll update when I find out more, but for the moment, I think we can do a bit of analysis on these images.

It seems to be based on a 1981 240D, and I believe is using that same, bulletproof 2.4-liter Diesel from the car. The wheels look like the originals as well, and I’m pretty sure the whole thing is scratch-built from the original W123 as opposed to being a modified Gold Wing motorcycle or something.

I love the repurposed lighting, the grille on the front of the sidecar, the way the hubcaps were retained, and the overall way the fundamental design vocabulary of the W123 was retained, even as twisted and tortured as it is here.

This thing is amazing and terrifying all at once, and I hope that it gets out of the museum and on the road at least occasionally, just to remind people that there’s still wonder and unexpected things in this world.