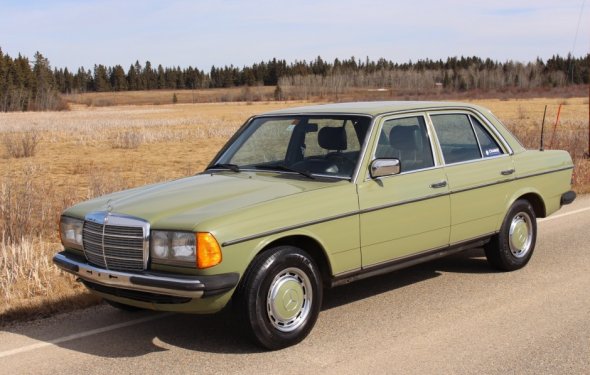 This 1982 Mercedes-Benz 300TD Turbo shows 188k miles and was Southern California car until the seller acquired it in 2014. Power comes from a 3.0L OM617 five-cylinder turbodiesel mated to an automatic transmission. The seller is the third owner and has added 2, 200 miles. The car was recently serviced with new front brakes, front lower ball joints, rear sway bar links, and a radiator. This unmodified W123 estate is offered at no reserve with some service records, an owner’s manual, and a clean Illinois title in the seller’s name.

The Taiga Beige (684) paint is believed to be original, as are the body panels. The seller reports that they have found no evidence of rust or rust repairs conducted by the previous owners. The self-leveling suspension received new hoses and fluid in 2016 and is reported to work.

The beige MB-Tex seats display even-pleating with some age-related creasing. The factory Becker Europa head unit remains in place, though the cassette player does not function.

The seller reports that the air conditioning blows cold and that all lights, gauges, windows, antenna, and vacuum locks work. The cruise control works intermittently, and the car is not optioned with third row seating.

The 3.0L OM617 five-cylinder turbodiesel was serviced each spring after being brought out of winter storage. The radiator was recently replaced.

Service in May 2017 included new front brake discs, calipers, and pads. The front lower ball joints and rear sway bar links were also replaced at that time, and an alignment was performed. Additional undercarriage photos can be found in the gallery.